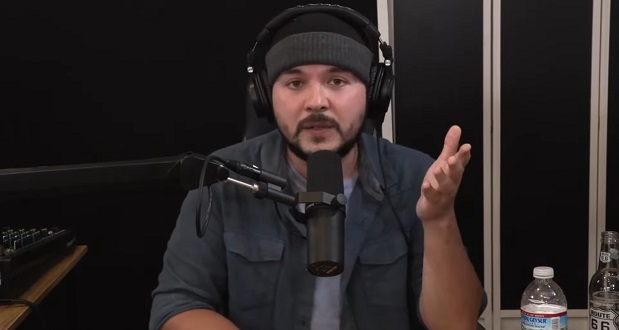 A month or two ago someone sent me a direct message regarding my suggestion that men with irredeemable hair should choose to wear caps for the sake of presentation. It’s a stance I will stand by on this website. The guy in question had a concern about doing this:

‘Aren’t you concerned everyone will know the reason you are wearing a beanie or hat is because you are bald, I’m thinking of Tim Pool in particular here. He wears literally the same beanie in every video because of his bad hairline’.

I have covered the meat of this issue elsewhere, but for this article I want to tackle Tim Pool’s use of hats and overall style. My contention is that if he dressed better in general and varied his hat options this sort of opinion wouldn’t be floating around the internet.

Anyone who has been caught in the intersection of YouTube and online politics, will be aware of Tim Pool. Currently he operates 3 different YouTube channels, each of which have over 1 million subscribers. Typically, he discusses social and political issues….. but those are not the focus of this website or indeed this article.

Tim posts a lot of content. Across his channels he seems to put up anything from 2-4 videos daily, the majority of which are talking head streams. I have skimmed over these channels, and it seems like he owns a total of 2 beanies. A two tone, black and grey beanie and an all-black beanie, both of which are brandless.

Are his hats worn because of a potentially bad hairline?

There is a photo floating about of Tim Pool’s hair where he is not wearing a beanie, I’m unsure as to the veracity of the photo though so I am not posting it here. You can easily find it yourself on Google. Due to the fact he never makes an appearance on camera without a hat, I am going to assume he is wearing beanies to hide thinning hair or a bald head. Uncharitable maybe, but it is the concern of my reader who contacted me.

Hat options he could go for instead

If you wear the same boring hats over and over again, like a real-life version of Meg Griffin, this does make it easier to be pigeonholed as a ‘hat guy’. We need to start by adding some variety to his options.

From videos I’ve found on YouTube Tim Pool appears to be a skater. This makes it even more shocking he only wears two hats. Skate wear/skate lifestyle companies make some of best (if not THE best) beanie and cap options on the market.

To list a few: HUF, Volcom, Thrasher, Element, DC Shoes, Vans, and many smaller brands that would take a whole separate article to go through.

His Wikipedia picture even shows him wearing a Volcom beanie:

He has clearly branched out to more interesting headwear in the past – although admittedly the hat in question was still black and the branding was minimal. However, from what I can glean from his channel days it’s just the two dour options I mentioned before.

There’s little excuse to only own two hats if he’s been around skate apparel his whole life, but the fact he is riding out his YouTube career with off-brand beanies might suggest he is avoiding repping popular brands on camera. For the sake of this article, I am going to ignore that and pretend that branding isn’t an issue. I would recommend the following caps to switch up with the beanies:

This is a simple Flexfit option, in a brand he has worn before, in colours he seems happy to wear. One of my favourite hat brands and Flexfit are the optimal choice for bald men as the enclose the back of the head fully whereas strap hats do not. Given how dark his usual hat choices are I would push him to choose the grey option to add a bit of variety to the hat line-up.

A more colourful option and a move away from the purely blue, black and white clothing he mostly wears. This is an iconic skate brand as well to boot. It is however a snap back, so if you are trying to hide a bald head it will reveal the back of it.

I’m throwing in another beanie option as well because I’m nice.

Polar make high quality beanies and this will freshen up the choices on that front.

Unless you happen to be a stripper, hats aren’t worn in isolation. As such we need to discuss pairing hats with the rest of the outfit. This picture shows what Tim typically wears:

I’m not a fan of pairing a beanie with this T-shirt and overshirt combo. He would be better off wearing just the T Shirt and pairing with a baseball cap instead.

When I look at how he dresses for his videos the word that comes to mind is ‘non-descript’. He dresses the same way most guys do: bland and lazy with their choices.

If you dress like this, be aware that this style is doing nothing for you in life. At best it is blending you into the noise, which I guess is a win if you are trying to go unnoticed.

In terms of how to dress on camera, you should keep it simple. But we want to aim for refined and minimal with a few little touches of interest. My main recommendation would be to ditch the overshirt and start with a slim fit T-shirt in either black or light grey. My brand preference is Zara, but I’d also suggest Uniqlo as another option if Zara is unavailable to you.

We want slim fit tees because they keep it snug around the chest and shoulders, they hug the bicep, and the slimming fit means they tighten up around the waist as well. This is the best fit for men as it accentuates the V-taper physique. And you should be doing your best to build towards that body shape as well – by losing weight and building muscle on the upper body.

Another option he could opt for over his usual combo is a plain black hoodie, which would pair a lot better with a black beanie than a buttoned shirt does.

A further option for pairing with a beanie is a lightweight denim jacket. This would achieve a similar aesthetic as the button shirt with the beanie, except it actually works as a pairing.

For any of these suggestions we would then add a couple of accessories along with the alternative hat options. I would keep it as simple as a nice black leather strap watch and maybe a ring or two. No need to deck out in lots of bling if you are just filming a talk show on YouTube, keep it minimal and classy. My rule with accessories is minimum of 2 and max of 4; with hat, watch and rings that hits the sweet spot.

So that’s how I would fix Tim Pool’s presentation. Simple and clean, but an upgrade on the overshirt/beanie combo which in my opinion looks frumpy.